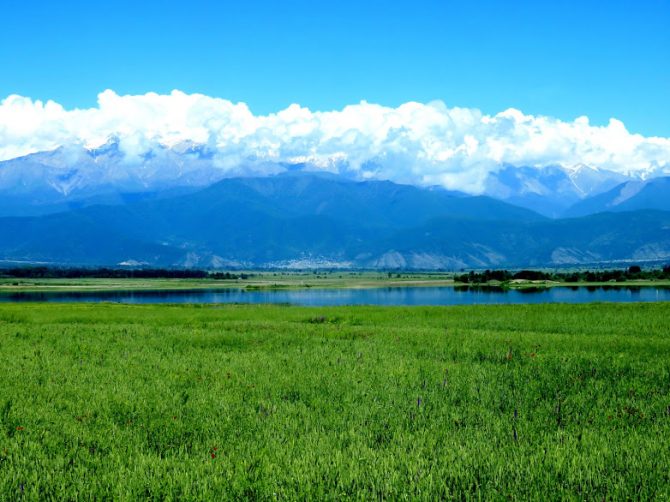 I knew this was going to be a long day with a mixture of several taxis and buses to make it from Sighnaghi in Georgia to Sheki in Azerbaijan. I wanted to start early, but Georgia is not the country where they wake up when the sun rises. In the end all i could do was go with the flow.

My host lady served a delicious breakfast of fresh cheese and bread. She insisted her husband would bring me to Tsnori from where i should take a bus to Lagodekhi. The husband was still fast asleep tough. I finished three chapters of my book when he finally appeared, but he was in no hurry.

A slow start of the day

After some tea he went to wake up his ancient lada. The car took some time to get started at this old age. It protested, screeched, squeaked and puffed, but finally gave in. The back of the car was stuffed with plastic soda bottles filled with wine and vegetables. Then we were finally ready to go for the ten minute drive down the mountain.

Instead of using expensive petrol he let gravity do its work. As we were rolling down the green hills all I could think of, was whether the brakes were still working. After just two days on the road in Georgia I am somewhat alarmed by the combination of bad road conditions, reckless drivers, old cars, animal compatriots and the love for wine and vodka.

Crossing the border from Sighnaghi to Sheki

I made it safely to Tsnori where I had to wait a while for the marshrutka (minivan) to fill up. The road to the border crossed the Lagodekhi Nature Reserve that is still full with bears and wolves. Not that i saw those on the road, but the green forests rising up on the mountains looked rather wild.

The border procedures were easy, especially when you consider that only 1 year ago getting a visa for Azerbaijan was still a complicated bureacratic procedure. Now I received a warm welcome.

The wild forests and green hills extended into Azerbaijan, but the first town I stopped in was very different from Georgia. Azerbaijan is an interesting mix of influences from Turkey, Iran and Russia, altough the influence of Russia is getting less day by day.

It was a few more uneventful but scenic hours before I reached the cute town of Sheki.

How to get from Sighnaghi to Sheki

If you want to use public transport my advice is to start early, because marshrutka’s tend to be less in the afternoon. It will take you all day, but it is a smooth and scenic journey.

From Tsnori you can take a marshrutka to Lagodekhi (1 hour).

Cross the border on foot (quick and smooth procedure).

From Balaken you can take a marshrutka to Zaqatala (45 minutes).

From Zaqatala you can take a marsrutka to Sheki (2 hours).

From Sheki you can take a bus or a train to Baku. Read more about Baku in my Baku travel guide and post about the best daytrips from Baku into the Absheron Peninsula.

Tags: Azerbaijan, Backpacking, Georgia, Sheki, Sighnaghi
There is 1 comment for this article