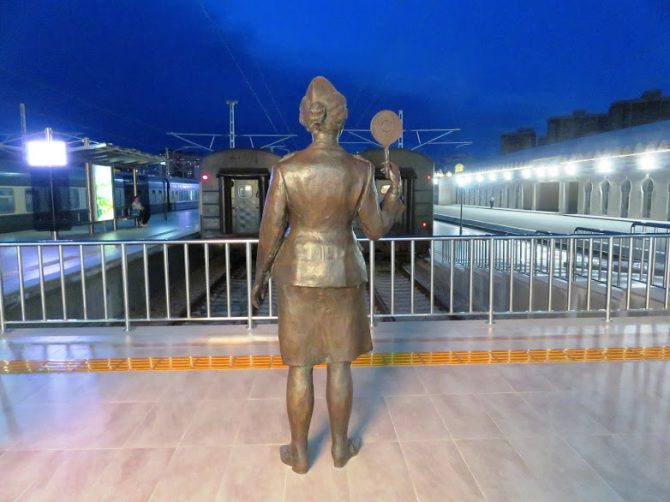 The helpful owners of my guesthouse asked me multiple times if I really wanted to take the train from Sheki to Baku. They warned me that it would be slow. 12 hours in fact, while the minibus would only take six hours. A bit worried they told the taxi driver to bring me to the booking office to buy my ticket.

The only railway office in town was nothing more than a small room with piles of papers reaching up to the ceiling. There were no desks and no computers, but several man hanging around whose functions were unclear.

It was useless to even try to talk with them and all communications went through my taxi driver. My name was written down on a piece of paper and I paid.

I did not receive any ticket or confirmation, but one man assured me he would be there in person, tonight, at the train station. The train station is not in Sheki itself but 17 kilometers south of town. I arrived half an hour before the train would leave and the man was indeed there with my official ticket.

With only 3 other people we waited for the train to arrive. For me the train was an experience and it would save me a night of accomodation. I would rather spend a full day in Baku than 6 hours stuffed in a minivan. A place in platzkart, the open carriage with around 50 bunk beds costed me less than 3 euro.

The train from Sheki to Baku

The train was old and it seemed not much had changed since soviet times. In the front of the train was an old samovar that looked rather complicated and dangerous and each carriage had a provodnika.

A provodnika is a lady that is supposed to look over all the needs of the passengers. Mine was a rather grumpy and strict lady ordering everyone around. Apparently there were strict rules when to walk around, when and how to make your bed and when to use the toilet. She was the only Azeri person that I met that did not smile.

Quite a contrast with my fellow passengers who were all very friendly and kind. They showed me how to make my bed and shared their homemade snacks with me. At some point I was trying to sleep and turned around to see 4 older ladies at the side of my bed smiling at me with their golden teeth. They wanted to know where i was from and what I was doing in Azerbaijan.

Even tough the trains look old and go slow they are in fact comfortable. I had a good night of sleep and I woke up to a landscape of barren dry dessert heavily polluted with left overs from the oil exploration.

The area around Baku is rich in oil and gas and throughout the last century many companies explored and exploited every inch of the land in this area. The rusty machines and pipes were still all over the place. The soil sometimes had strange colours. The ugliness went on for a couple of hours before we finally reached Baku.

The train from Sheki to Baku was a journey of contrasts. From the green rolling hills to the ugly polluted dessert landscapes, from the poor mountain villages to the fancy city of Baku and from a a ticket office with no computers where my name is written on a piece of paper to the ultra modern station of Baku where everything is new and shiny. The old rusty and squeeking train arrived at a platform where everything is new and shiny

The only thing that seems to be constant, with the exception of my provodnika, is the friendliness and the smiles of the people in Azerbaijan.

The train from Sheki to Baku: logistics

The most recent timetable is on the website of the Azeri railways. In June 2017 the train left daily from Sheki at 21:50 and arrived in Baku at 07:55

How to book your Azeri train tickets

Because domestic trains take longer than the bus they are often not sold out, except on holidays. You can always buy tickets at the train station or a travel agency in town (bring your passport). If you want to make sure you get a ticket it is also easy to reserve tickets online at the Azeri railways.

You can reserve tickets online 10 days before departure with a maximum of 4 tickets. When you pay online you won’t receive a ticket yet, but an order confirmation. You need to print this and together with your passport you can then collect your ticket at an Azeri train station.

Keep in mind that Sheki train station is 17 kilometers south of Sheki. A taxi should not be more than 5 manat (as of June 2017).

How to choose a seat on an Azeri train

Domestic Azeri trains still use the same classess as during the Soviet Union and the ones that are still in use on Russian trains as well.

Obshye is the cheapest class, but this is just a seat and not recommended for overnight journeys like the train from Sheki to Baku. The next cheapest option is platzkart. They are open compartments with 6 bunk beds and in my opinion quite comfortable.

If you prefer more privacy you have two options. Kupe are closed compartments with 4 beds and SV/Lux has only 2 beds.

Solo female travel and safety on an Azeri train

This might sound contradictory, but as a solo female traveller I prefer platzkart over Kupe or SV/Lux. A closed compartment may sound more safe, but you can not choose your companions.

In my experience platzkart has a very high social safety. People watch out for each other and thewre are always some aunties that feel it is their responsibility you reach your destination safe and well.

That said, it is not a bad idea to lock your luggage.

What to expect on an Azeri train

Like in Russia every wagon has a provodnitsa. Someone who is in charge of making sure everyone behaves like they should. They will hand out bed sheets and pillows and will also collect them as soon as you get up in the morning.

There are also toilets that get more dirty as the journey progressess. Bring your own toilet paper. Other things to bring along are some snacks and Google translate so you can have some kind of conversation with the people that will definetly try to talk to you.

More information on train travel in Azerbaijan is on Caravanistan or Seat61.

Alternative ways to get from Sheki to Baku

The train is not the only option to get from Sheki to Baku. There are frequent marshrutka’s from the Sheki bus station that take around 6 to 7 hours

Read my other articles about Azerbaijan

If you want to read more about Sheki you can read my post on the best things to do in Sheki: Azerbaijan’s silk road.

And if you want to read more about Baku you can read my post on the best things to do in Baku and the best day trips from Baku.