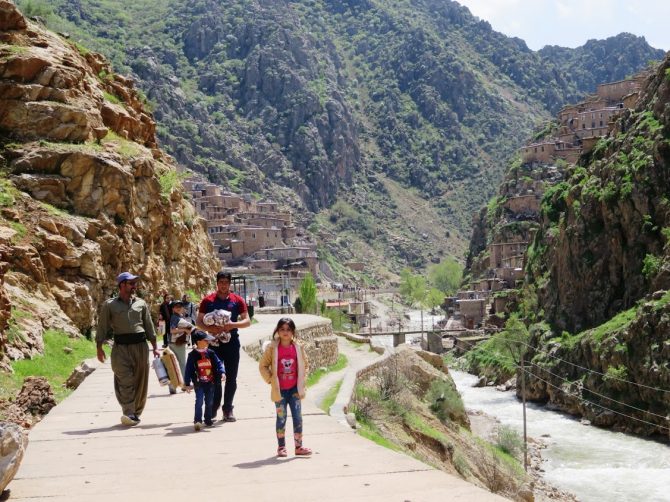 This post is all about Palangan and Sanandaj in Kurdistan iran and how to travel in this off the beaten path destination.

Visiting the village of Palangan in Iranian Kurdistan was high on my bucketlist. I had seen beautiful pictures of the stepped village in the Kurdish mountains. Despite its beauty Iranian Kurdistan with its friendly capital Sanandaj sees few visitors. This made me even more curious to visit this interesting region in Iran.

Kurdistan is not an actual country, but the Kurds are a proud ethnic group of about 35 million people living in Turkey, Iraq, Syria and Iran. As ethnic minorities they have often faced repression and discrimination. Many Kurds dream of a Greater Kurdistan where they can be themselves.

Like their neighbours in Iraq, Syria and Turkey, the Kurds in Iran also have a history of discrimination, although less prominent as in other countries. It seems that in Iranian Kurdistan the Kurds have more freedom to follow their own culture.

One example is that the dress code for women seems to be more relaxed in Iranian Kurdistan. Rather than the darker colours in most of Iran, the bazaar in Sanandaj was full of colourful dresses. I did not see one woman wearing a chador. The men wear a traditional costume of baggy pants with a belt which is a common sight if you walk through the bazaar in Sanandaj.

Despite the Kurdish hospitality, many Iranians believe Kurdistan to be dangerous. Kurdish people in Iran are perceived to be wild and uncivilized. What I found was quite the contrary.

Sanandaj: the capital of Iranian kurdistan

The capital of Iranian Kurdistan is Sanandaj from where it is an easy day trip to the village of Palangan. The bus from Tabriz to Sanandaj took 7 hours, but it was a pleasant journey. We rolled through a mountainous green landscape while the bus assistant kept sharing food and cups of tea with me.

Sanandaj is a small town surrounded by hills and has a lively bazaar full of fresh fruit, vegetables and herbs. Iranian Kurdistan does not see many tourists, therefore people were really curious and welcoming. Iran keeps surprising me with its hospitality, but Sanandaj really made it to the top of the friendliest cities.

I found a small place where they served tea and dizi, a lamb stew with chickpeas, potatoes, onions and tomato. It was my first time to eat dizi in Iran and it is eaten in a very particular way. First the broth is poured in a bowl with pieces of bread. Then the rest is mashed together and eaten with the rest of your bread.

Luckily I had read this before in the Lonely Planet otherwise I would probably have made a fool out of myself. Still I was quite the attraction in town. When I entered the restaurant there were just a few other people, but in no time it was full with people watching me eat.

The next day I finally went to Palangan. My reason for visiting Iranian Kurdistan. First I had to take a bus to Kamyaran where I was lucky to catch the infrequent public bus to Palangan. The local minibus was an experience in itself. Once everyone boarded we actually went back into town.

People needed to do groceries and we spent one hour stuffing bags full with potatoes, onions, garlic and tomatoes untill there was hardly any space left for us to sit. I was adopted by an older lady who kept giving me sweets and sunflower seeds while she was obviously talking about me with the other passengers.

Palangan is a quite popular picknick spot in Iranian Kurdistan. It was friday and the day off for Iranians. It was quite busy with people from Sanandaj escaping the city. Unlike Masouleh in Gilan, that is also very popular with local tourists, Palangan still feels very authentic.

The villagers in Palangan go on with their daily life. Men are herding the sheeps, women do the laundry and children are playing around on the roofs. The stepped village is an oasis of peace and quietness.

Near the river were several restaurants selling fresh fish. I ordered tea and soon several families joined me that wanted to know everything about the Netherlands. Nobody spoke english, but with the help of Google translate we managed to have some kind of conversation.

By the time I wanted to go back to Sanandaj from Palangan, the last bus had left. One of the villagers from Palangan immediately offered himself as a taxi driver. The same roads looked even more beautiful with the sunset.

Kurdistan in Iran is really a beautiful place and and I wish I could have stayed longer. Besides Palangan there are more scenic villages in Howraman along the border with Iraq. They would require your own transport or a taxi, but after my visit in Palangan I am sure it is worth it.

Other things to do in Iranian Kurdistan

If there is one place in Iran that I would come back to it is Iranian Kurdistan. I was there only 3 days which was enough to see Palangan and Sanandaj, but there is much more to see in this area.

Palangan is not the only stepped village in this area. The spectacular Howraman valley is full of scenic stepped villages such as Paveh and Uraman Takht. Public transport is rare and therefore to truly appreciate this area you will need your own transport and at least 2 days allowing you to stay at a homestay in one of the villages.

There is also Marivan at the border with Iraq. This friendly Kurdish city is near the beatiful Zarivar Lake. Another great picknick spot famous among local tourists.

I did not stay in Palangan and as far as I am aware there is no official hotel in the village. However, some families offer homestay options if you ask around in the village.

Hedayat Hotel was the most affordable option with 400,000 rials for a single room when I was there in 2016. It’s a good hotel with friendly people and a nice breakfast included.

Note that most hotels in the 2012 edition from Lonely Planet no longer exist.

What and where to eat in Kurdistan Iran

There are plenty of places to eat in Sanandaj, but for tourists it is maybe not so obvious where to find them and which are also good places to eat for solo female travellers.

One recommendation is Jahan Nama. It is in the middle of the center, but located in a basin that is nicely decorated. The menu has a variety of Kebabs and other Iranian dishes, but unfortunately not Kurdish food if that is what you are looking for.

Another option in the center is Sheyda restaurant that has a similar menu with Iranian food. If you are on a budget you can also eat at the bazaar where they have several places selling dizi. A delicious but fatty and heavy lunch.

People come to Palangan for a pick nick or to eat at one of the simple outdoor restaurants near the river serving excellent grilled fish and tea. Fish, called mahi in farsi, is not often on the menu in Iranian restaurants and in my opinion Palangan is one of the best places to eat fish in Iran.

Read more about Iranian cuisine in my Persian food guide: eat your way through Iran.

Is it safe to visit Iranian Kurdistan?

Many Iranians will tell you that Kurdistan is a dangerous place and with the conflicts in Kurdish Iraq and Turkey you might wonder whether Iranian Kurdistan is safe to visit.

Let me start that Iran is currently one of the safest countries to visit in the Middle East. This includes Iranian Kurdistan. Iranian Kurds have been living peacefully in Iran for centuries.

Even though Kurds in Iran do face some discrimination as an ethnic minority they have had much more freedom to follow their culture than the Kurds in neighbouring countries. That is why in Iran there has not been any major conflict between the Kurds and the government.

After travelling in Iranian Kurdistan I can only wonder about the misperception among Iranians that Kurdistan is dangerous. It really isn’t. Even travelling to Marivan and Howraman that is next to the border with Iraq is safe.

In fact, Iraqi Kurdistan is an equally beautiful place to visit. Even though I have not been there yet, I am hoping to go there soon. Maybe now you think I have lost my mind, but you can read hear from another traveller that went there twice that even Iraqi Kurdistan is safe if you do your homework before you go.

As a woman travelling alone I had no problems in Iranian Kurdistan. That said,  even in Sanandaj people do not see many tourists, let alone female tourists travelling on their own. You will get a lot of attention in the form of curious stares and people that want to talk to you.

Logistics: How to get to Palangan and Sanandaj in Kurdistan Iran

From Tabriz there are frequent local busses to Saqqez (about 4 hours) and from there you can take frequent buses to Sanandaj (another 3 hours). Sanandaj has buses to Kermanshah, Hamadan & Tehran as well.

I started my journey to Iranian Kurdistan from Tabriz. To read more about everything to see and do in Tabriz you can read my post about the best things to do in Tabriz.

If you are interested in visiting traditional villages in Iran I can also recommend Gazor Khan in the Alamut valley and Masuleh in Gilan.