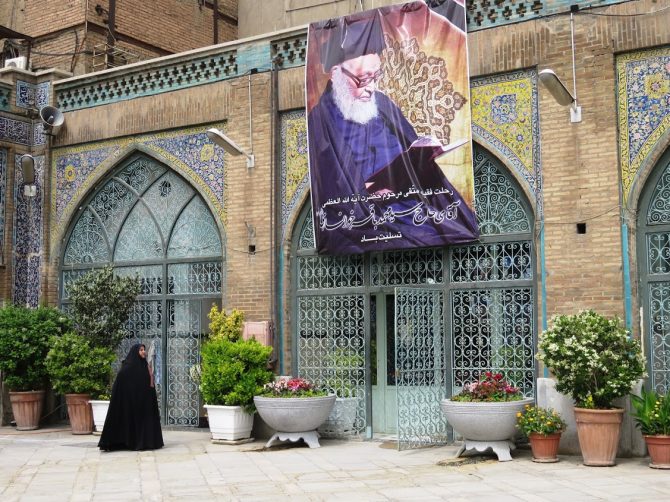 I just wanted to buy some souvenirs on my last day in Iran and therefore I headed to the Tehran Grand bazaar. I was planning to go there for maybe an hour, but ended up spending the whole day in the Tehran grand bazaar. What was I thinking to just go for an hour?

Tehran’s grand bazaar is about twenty square kilometers, has over 200,000 vendors and almost 2 million visitors per day. Some claim it is the largest bazaar in the world. Tehran grand bazaar is a city of its own with hidden mosques, mausoleums, shrines, teahouses and restaurants.

When you walk through Tehran grand bazaar don’t forget to look up sometimes. The ceilings are beautiful. It’s hard to describe this endless maze of twisting alleyways that keeps surprising you. Even if you don’t need to buy anything a visit to Tehran’s grand bazaar is a highlight of your trip to Tehran.

The bazaars of Iran are really something special. Tehran Grand bazaar might be the biggest, but don’t overlook Iran’s other bazaars. Each city’s bazaar has its own unique charm and atmosphere. From the beautiful ceilings in Kashan’s bazaar to the religious items in Qom and the colourful dressess of the nomads in Shiraz.

The bazaars are always the historical heart of any city and where most of city life is still happening. Tehran’s bazaar is a rather chaotic mix. There is no way pictures can capture the full experience of sounds, smells and sights, but I selected some of my most beautiful pictures of Tehran’s grand bazaar. They will guide you along the sights not to be missed.

Places to visit in the Tehran grand bazaar

Start your visit to Tehran’s grand bazaar at the main entrance at Sabze meydan square. It is right across the Golestan palace so a visit to the bazaar is easily combined with this highlight of Tehran.

Before you enter the bazaars inner world try some of the dried fruits and nuts or fresh juice for sale from the vendors near the entrance. The pomegranate juice comes recommended.

Right in the middle of the Tehran grand bazaar you will find the beautifully ornamented Imamzadeh Zeid shrine. It is the shrine of a descendant of the prophet and it is definetly worth a visit inside. Women have a special entrance and are given a chador to wear.

The imam mosque with its colourful tile work was my favourite place in the Tehran grand bazaar. The peaceful courtyard is a great place to sit down and take some rest from the sensory overload you get in the narrow lanes surrounding the mosque.

Despite the serene atmosphere this is an active place of worship where a lot of things are going on. People come to pray, pass through from one part of the bazaar to the other or take a break from all the shopping.

The imam mosque is one of Tehran’s oldest mosques. It was built around 1810 during the Qajar period when it was known as the Shah mosque. It was renamed after the Islamic revolution.

The most impressive area of Tehran’s grand bazaar is the carpet section. It will be a bit difficult to just have a look here, as the vendors are eager to get you in their shops.

Even though I made it very clear that I was not going to buy a carpet I was still invited for tea. You might want to visit one or two shops as some of the carpets are simply works of art that the vendors will proudly show you. Just be aware that the salesman might convince you to buy a carpet in the end anyway. I was for sure tempted.

Things to do in Tehran Grand Bazaar

Tehran’s grand bazaar is the best place to buy souvenirs in the country. It might not be the cheapest and you need good negotiation skills, but you will find almost everything from the different regions in Iran. From Isfahani carpets to Termeh from Yazd and Shirazi ceramics. Food lovers should look out for the pistachio nuts and saffron.

6. Look up and around you

When walking through the Tehran grand bazaar, don’t forget to look up and around you. The domes and ceilings are beautiful and show the long history of Tehran’s bazaar.

Even though there is evidence that from the 7th century there has been a bazaar at the current Tehran grand bazaar, much of what you see today is not more than 400 years old.

The bazaar grew rapidly in the 19th century and has seen many renovations, rebuildings and additions. Newer sections were built in the 20th century and the bazaar remains a work in progress. The result is an interesting mix of different styles from different ages.

Don’t be surprised if you are invited for a cup of tea at the bazaar. Even though salesmen might want to sell you something, they are also curious about you as a foreigner. Before you know it you are discussing politics or philosophy with people you just met. Iranians are some of the most welcoming people I have met in my travels.

Where to eat at the Tehran grand bazaar

Moslem restaurant has almost 5000 visitors every day and serves the best tahcin with chicken in Tehran. It’s a buttery chicken with rice, saffron and barberries. They serve huge portions and the food is absolutely delicious. The long line outside might stop you. I almost gave up, but I am happy I did not. The line goes fast, food is served quickly and is absolutely worth it.

You can also read my Persian food guide: eat your way through Iran.

If you prefer a more ambient setting in Tehran’s bazaar go to the beautifully decorated Khayyam traditional restaurant located in a 300 year old section of a mosque. There is an english menu with a variety of Persian dishes. It is on the more expensive side of restaurants in Tehran grand bazaar.

Always busy and serving huge carbohydrate rich portions of rice and kebabs for a great price. You can find Sharaf ol Eslami opposite the jewellery section.

For the best grilled kebabs of Tehran’s bazaar, head to Shamshiri.

If you want to read more about Iran’s food read my post here on the Persian food guide: eating your way through Iran.

Tehran Grand bazaar is a safe place to visit, but like most bazaars in the world pickpocketing can happen. Keep your valuables safe and take normal precautions.

For solo female travellers I wrote a post with tips and advice about traveling as a woman in Iran.

How to get to the Tehran grand bazaar

Tehran’s grand bazaar is in the southern part of Tehran. There are several entrances, with the main one at Sabze meydan right accross the Golestan palace.

It is easy to get to the Tehran grand bazaar by metro. You should take the red line and exit at either panzdah-e-kordad station or khayyam station.

If you want to come by taxi and have an Iranian sim card you can also use the Iranian versions of uber called tap30 or snapp. Just keep in mind that the traffic might be crazy and the metro will be much quicker.

The Tehran grand bazaar is open every day from 8 AM till 9 – 10 PM in the evening.

Don’t make the mistake I made and think you can come for only an hour. It is easy to spend the whole day exploring. If you really have limited time, than half a day is the minimum time you need.

Where to stay near Tehran Grand Bazaar

Booking hotels online is rather difficult for Iran. Because of the sanctions, most regular sites like Booking.com or Airbnb won’t work.
To book your hotel beforehand you either need to contact them directly or use FirstQuest

They are one of the few companies where you can plan most of your trip to Iran beforehand. They can book hotels online, arrange airport pick ups, domestic flight tickets and bus tickets.

If you like to stay somewhere near Tehran Grand Bazaar there are several hostels relatively nearby.

Seven hostel is a 20 minute walk away from Golestan palace and the Tehran Grand bazaar.

The Tehran Heritage Hostel is a 30 minmute walk to the Tehran Bazaar. Alternatively, the hostel is right next to Baherestan Metro station where you can catch the metro to the bazaar.

Hi Tehran hostel is a bit further away from the bazaar, but is right next to Ferdowsi metro station from where you can catch the metro to the Tehran Grand bazaar.

Other bazaars in Tehran

Tehran grand bazaar is not the only bazaar in Tehran. There are other bazaars that are also worth visiting.

Tajrish bazaar in the north of Tehran might not be the biggest or the oldest, but is considered more tourist friendly and is just as beautiful as the Tehran Grand bazaar. It is close to some of the tourist attractions in the north of Tehran such as the imamzadeh Saleh shrine, Darband, the Tochal mountains and Saadabad palace complex.

Rey bazaar in the south of Tehran is about 500 years old. Traditionally it was a market for spices and herbs, but nowadays it also sells a lot of religious items due to its location near the Abdol azim shrine.

A visit to Rey bazaar is perfectly combined with a visit to the 5000 year old city of Shahr-e Rey. Now a suburb of southern Tehran it used to be a seperate and much older city that was once the religious center of the Median empire. Many historical monuments still remain.

Disclaimer: This post about Tehran Grand Bazaar contains affiliate links. If you buy any service through any of my links, I will get a small commission at no extra cost to you. These earnings help me to keep Backpack Adventures alive! Thanks for your support!

Tags: Iran, Tehran
There are 19 comments for this article

18 Top Things to do in Samarkand Uzbekistan629 Total Shares